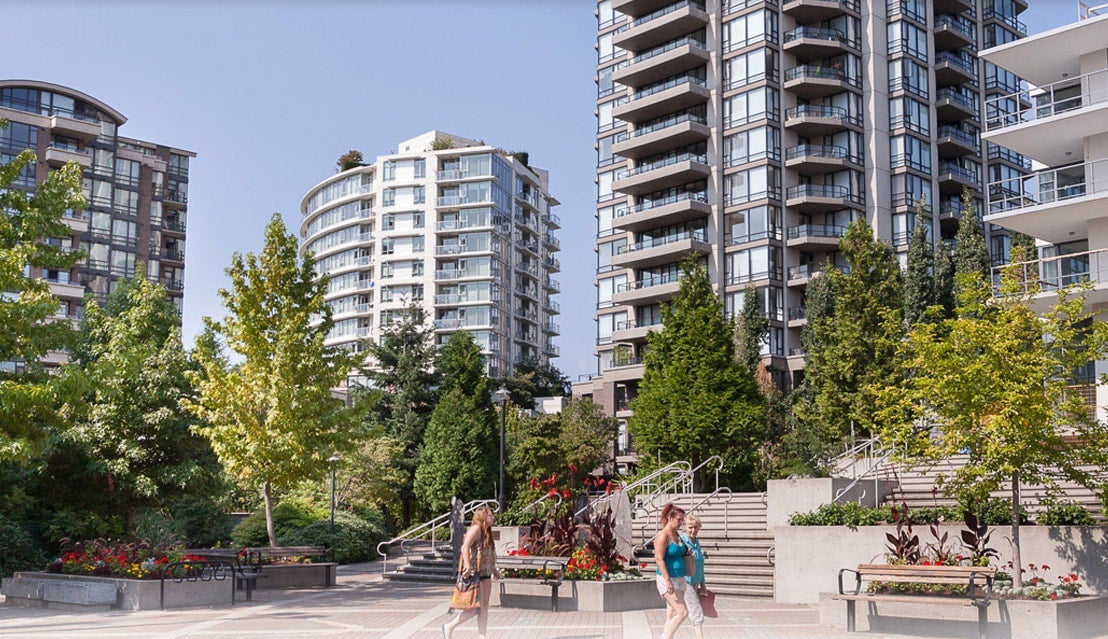 This year the cherry trees might be taking their time to blossom, but spring is already here and the real estate market is getting ready to get its yearly boost. Headlines in the media proclaim the Vancouver real estate market is finally cooling off and there might be some truth to that. However, sales stats tell a different story, particularly in the North Shore.
While the detached home sales have slowed down, condos – particularly in Lower Lonsdale – are a hot commodity.  Consider these statistics: the average sale price of a condo in North Vancouver in February 2016 was $457,399, the average sale price of a condo in North Vancouver in February 2017 was $555,972. In just one year, condo sale price average has raised almost $100,000.  Condos in Lower Lonsdale have seen the most increase in sale price average: in February 2016 it was $464,328, this past February it was $577,238. Another impressive stat of the condo market in North Vancouver is the average days on the market. In February last year it took about 40 days for a suite to sell, compared to only 17 days last month – in many cases, it took only a week. In other words, condos are moving fast. Click here for a closer look at the average sale price condo statistics. 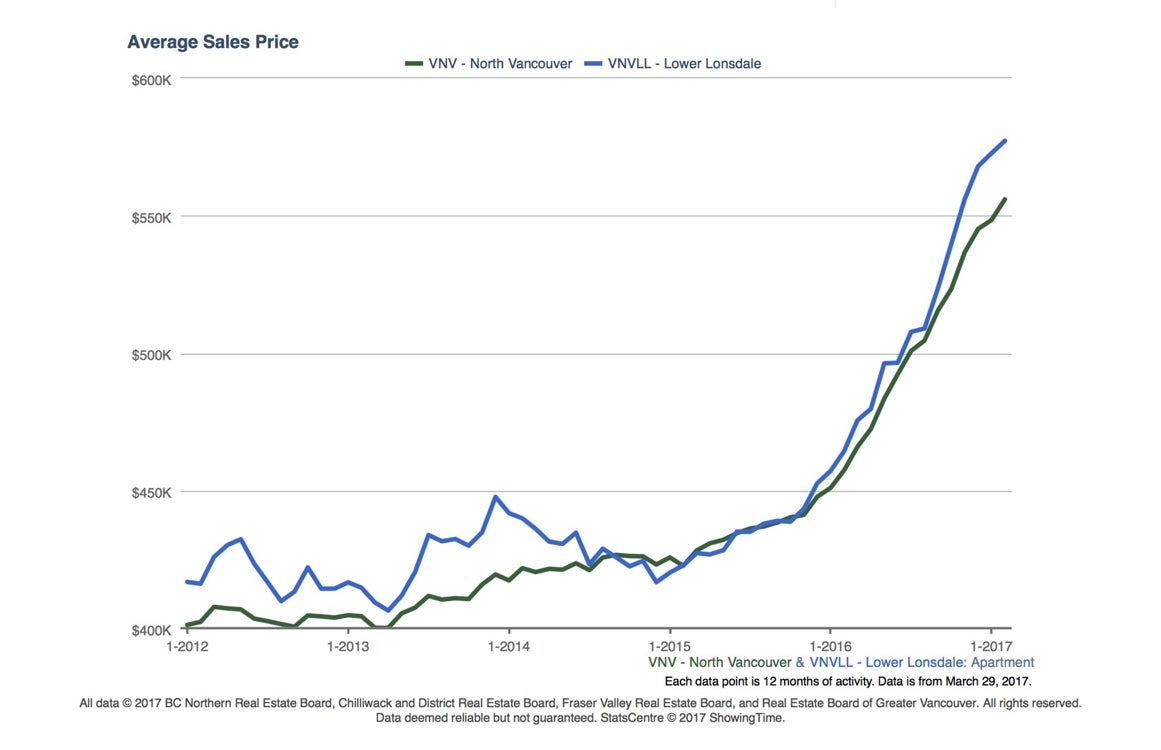 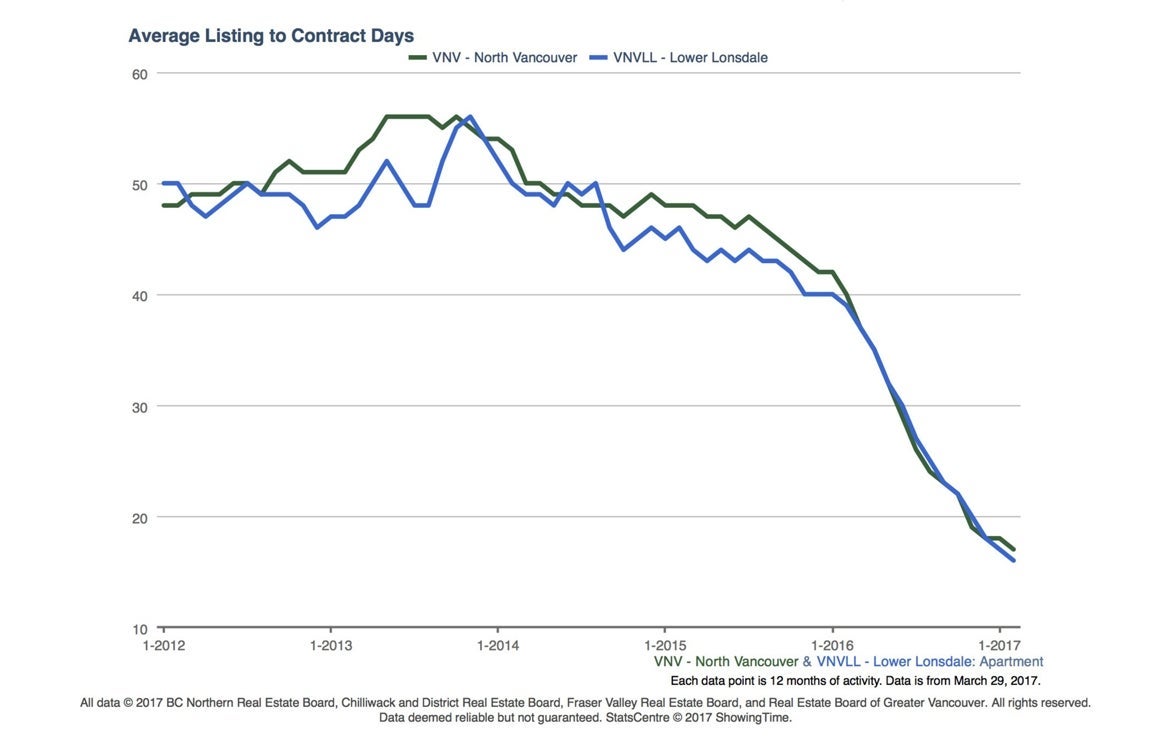 Meanwhile, the detached house market is more stable, especially compared to the frothy market of last spring.  A year ago, detached homes with an asking price of $1.3 million, were often selling at $1.5 million or more with multiple offers. Currently, the average selling detached home in North Vancouver is $1,717 716, still on the high side, but it has leveled off since December 2016, when it reached its highest at $1,740 538 and the multiple offer scenario is far less common. Many sellers, who sold over the last year, were taking advantage of the higher prices with many moving to the Sunshine Coast, for example. Click here for a closer look at the average sale price of detached homes statistics.
So what is different this year from last year?
The first obvious difference is the Foreign Buyer’s Tax, which came into effect last summer, and its aftermath is still affecting the market. The second difference between this and last year is the fact that single-family home builders – which were a major player in last year’s market – are being more conservative in acquiring land for new development. A third difference might have to do with the shift in Vancouverites’ mentality regarding living space and affordability; we are becoming more acceptant of living in smaller places. These are just some of the dynamics affecting the local market. If you wish to have a more in-depth discussion, click here.
The cooling off in detached home average prices combined with the demand for condos create an opportunity for those homeowners who are already in the market and wish to jump from a condo or townhouse to a detached house. This is because the gap between condo and detached house prices is moving closer together, allowing for people to start moving up again. Yes, you read that right: this might be your chance to move to a bigger home.
Do you own a condo on the North Shore and wish to move to a bigger home? This might be the time to do it. Contact me now for a free market evaluation and to talk about your options.