What is going on down at the Shipyards? 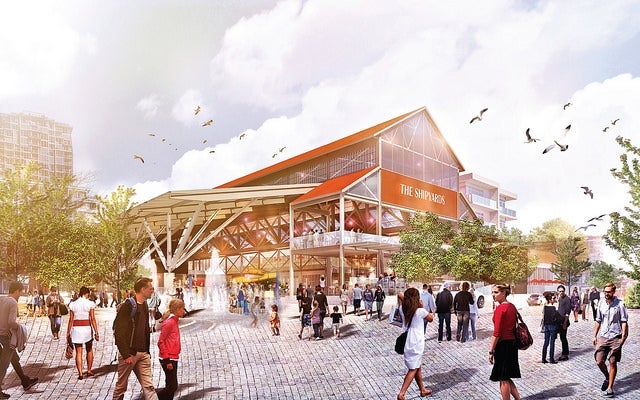 The past few weeks have brought change to the Shipyards. It’s been busy. Excavators, drillers and trucks have been working, moving earth and preparing the site to begin construction of the development of Lot 5 (the space that used to be occupied by the volleyball courts, right in front of the Pinnacle Hotel.) But what is exactly Lot 5 and how will the next phase of development transform the heart of Lower Lonsdale?
Lot 5 is the City-owned 1.6 acre space that sits between the residential developments to the east and the Shipbuilders’ Square to the west. Three years ago, after much indecision from the City of what to do with the waterfront lot, Roger Brooks, a marketing destination expert, was hired to get public input and turn it into a vision. The result included a Ferris wheel like Seattle Big Wheel and Bellagio style water fountains. Much of the grandiose plan has been toned down, however the vision of transforming the Shipyards into the heart of Lower Lonsdale and an attraction to the North Shore remains the same. One of the first steps was choosing Quay Property Management as the City’s partner in the development of Lot 5. Now, as the earth is being moved, that vision is fast becoming a reality.
According to the City, the goal is to “create a significant people place with active and interrelated public spaces offering year-round activities all of which are supported by a surrounding commercial development.” It will feature an outdoor public skating rink (the largest in the Lower Mainland) for the winter and a water play area for the summer. At the centre of the site, there will be a major covered outdoor gathering space and during the summer months the ice skating rink will become a plaza, which will be home to markets, car shows, performances and festivals, among many other activities and events. The development is also planned in a way that it will open towards the Shipbuilders’ Square so that the two can become one space for bigger events.
From an architectural point of view, the main feature of the project is that elements from the Machine Shop building will be incorporated and positioned as the centrepiece of the development.  This approach hopes to guarantee continuity of history through the Shipyards. From spring to fall when the skating rink is gone, bold lines etched into the surface of the plaza will be visible. These lines will be faithful in shape and scale to the tracings left on the shipyard buildings, where the hulls of great ships were made during the early part of the 20th Century.
As for the commercial and retail zones, the buildings housing these activities in the ground floor will be located to the north and east sides of the site, surrounding the public space. Art , culture and community uses will be in the second floor. The third and fourth level will be a boutique hotel. And yes, there will also be more parking.
If you want to look at more plans and drawings of the Lot 5 Development, click here. Together with the Polygon Gallery, the Pipe Shop, the Shipbuilders’ Square and the new North Vancouver Museum, Lot 5 will certainly transform Lower Lonsdale into the North Shore’s most vibrant neighbourhood. Would you like to live here? With 18 years real estate experience on the North Shore, and specialization in Lower Lonsdale, it would be my pleasure to assist you in finding your dream home!